I've decided there have been enough nipple tassels in my blog for now, so this entry I'm going to give you a dressing room audit instead. Ooh the excitement, I hear you cry. But seriously, this is a matter close to all performers' hearts, and therefore deserves its place in a 'behind the scenes" diary.

A few years back a stand up comic friend used to invite me backstage now and again when I went to watch his gigs. This was before I was a regular performer around London myself, and I was completely gobsmacked to discover that even in the pretty big-time comedy clubs the dressing rooms were uniformly tawdry, peeling affairs with strip lights and seats with the foam sticking out through holes in the vinyl. However, what interested me more than the décor was finding out what stand up comics talk about backstage. Would there be badinage? Would they try out new material on each another? Would there be some sort of comedy haka?

Guess what? Stand up comics talk about dressing rooms. They start off doing an audit of the dressing room they're in, and then they go into a compare-and-contrast with the dressing rooms of all the other comedy clubs around the country. It didn't take me long to pick up on the fact that there was a subtext going on, namely "let me give you a list of all the comedy clubs I've played in all over the country, and then you can list all the ones you've played in, and let's see if mine's bigger than yours." But even with the subtext it was not exactly scintillating conversation.

Only now I've been performing for a bit myself do I realise that the chitchat you make in dressing rooms before you go on stage is not a fully functioning conversation, it's more like verbal chewing gum, giving you something to do with your mouth while your mind runs around the act you're about to do on stage, what your opening line is going to be, whether you've left a set list somewhere you'll be able to see it, whether your ukelele is in tune etc etc. I know women are supposed to be good at multi-tasking but I've discovered I can't actually put my make up on and retain any information from a conversation I'm having at the same time. I'm like a goldfish while I'm sticking my false eyelashes on; a few weeks back I had a whole ten minute reminiscence conversation with Vile-een of Pustra and Vile-een about Edinburgh Fringe experiences, and two minutes later I asked her whether she'd gone last year, a question which she had just spent ten minutes answering.

But if there is one conversation guaranteed to get a dressing room full of musicians, burlesquers and cabaret performers' animated attention, it's a discussion about dressing rooms. Now that I am one of the performers engaged in these conversations on a weekly basis, I don't think they're about willy waving any more. I think they're partly a sort of comfort conversation, and partly a sort of solidarity conversation ('we're all in this together"). They're also about straightforward curiosity, stemming from the fact that sometimes a dressing room comes as a big surprise when you compare it to the side of the venue that the punters get to see.

Volupte is my favourite club in London, but it hasn't won my heart through the charms of its dressing room I can tell you. Not exactly palatial at the best of times, trying to find a corner of mirror to use to put your make up on when there's a full compliment of burlesquers on the bill is an exercise in human origami. The other week I put my foot through my dress with my stiletto and ripped it, because I was squatting in the corridor in my gown while trying to put my make up on in a mirror propped on the floor because there was no room in the dressing room itself. Thank God for iron-on fabric repair kits. And then a couple of gigs back I was just about to put my vintage Christian Dior pink satin court shoes down on the floor when I noticed that I was in fact standing in a puddle, and the whole dressing room floor was flooded. Apparently this is a side effect of the washing machine, which the staff themselves have got so used to that they don't even notice any more. The human origami got even more advanced when we had to try and share a corner of the mirror and avoid standing in an inch of water in our best shoes at the same time. I'm tempted to give Volupte the 'worst dressing room' award.

'Smallest dressing room award' may well go to the Glass Bar at Euston Station, but since the whole women-only bar is so tiny it fits inside one of the two stone lodges at the entrance to the station, its dressing room is charmingly to scale, and it seems churlish to complain that you can only fit one person in it at a time. 'Biggest dressing room award' goes to the Sideshow dressing room above the Arts Club near Leicester Square, because the 'dressing room' is in fact the dance studio one floor up from the club, which has vast acreage of mirror – and a bar, in case anybody fancies some warm up demi pliés. This much space can go to a performer's head. In fact, last time I was there, I witnessed Matt Fraser run across the room, slap burlesquer Lamb Chop Magoo on the arse, then run back to the other side of the room (as if to conceal the fact it was him). He also tried out some high kicks on one of the pillars in the middle of the room – his footprint may well be still there, 6 feet above the floor.

'Most glamorous dressing room award' goes to Paradise By Way of Kensal Green. The other day I was doing a little ukelele interlude in between dazzling burlesque numbers at Roxy Velvet, Ivy Paige and Kitty Bang Bang's night "Head over Heels." The dressing room was an elegantly appointed space with a huge gilt-framed mirror at one end, a wall full of mirrors of every shape and size at the other end, and a range of beautifully upholstered couches in between. What really ratcheted up the glamour factor, however, was the fact that there was not one, not two, but three photographers roving the room while the girls were getting changed, taking candid snaps of them sticking on their nipple tassels, pulling up their stocking etc. It was like the photos of the bride getting ready that you get in wedding albums, but with about six brides at once. I was in the midst of blowing on the glue on one of my false eyelashes when I looked up to find a camera lens trained on me from about a foot away (I sensed there was some sort of arty 'reflection in the mirror' shot going on). I think I ruined the potential glamour of the shot by looking up, startled, as if I'd been caught out with my false teeth or my glass eye in my hand after the ball was over. I'm not sure how I feel about close ups of my false eyelashes, to be honest, particularly since I've been wearing the same pair for about six months now (does that make me an eyelash slut?). Not that I needed to worry about intrusive lenses too much since I was in the weird position of being so low-key as to barely register on the glamour radar in the company of Misses Velvet, Paige and Bang Bang and their guests, despite the fact I was wearing a full-length turquoise fringed evening gown and feather fascinator. Ironically, I was both over- and under-dressed at the same time.

I'm going to give my 'Favourite dressing room award' to the BFI Southbank after last night's gig though. I'd asked if there was a room we could dump stuff and get changed in, and was shown into a big square room with a mirrored ceiling, a coffee table with bottled water laid out for us, and loads of smart-looking chairs. The Lady Greys were draped around the room getting ready to do their Edwardian skirt dance, pouring themselves into vintage underwear or sitting in the splits, and generally making the place look like an Edward Degas painting. Okay, so the dressing room wasn't entirely functional, since the only mirrors in the room were on the ceiling. 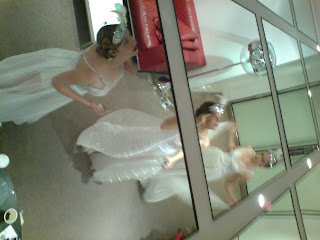 This led to a lot of cricks in necks as we all craned our heads backwards to check head gear, hair and make up. But once we'd finished our gig, me and Connie discovered a giant leather bean bag we could lie on and look up at ourselves on the ceiling, which has got to be my favourite post-gig chill out position ever. Claire the organiser popped in for a chat and revealed that we were in the green room that had been used by all the stars who'd made personal appearances at the BFI Southbank, reeling off a list of names that included Anjelica Huston and George Clooney. I wonder if George Clooney lay on his back on the same beanbag, looking up at his reflection in the ceiling? I bet he did.

Or maybe he had a chat with Anjelica Huston about how this room compared with other dressing rooms they'd both been in. I'd love to know how they rated it.