Countdown to the big gig

We’re playing at White Mischief at the Scala tonight. TONIGHT! After months of build-up, the big night is almost upon us. This is probably the coolest, most big-league gig the band has ever had.

Here are some of the preparations we’ve been making:

Inter-band emails
Nothing can ever be arranged or confirmed without the full Slinktet checking their diaries and cross referencing the dates everybody can do. This involved mind-numbingly tedious ‘reply-all’ emails, which make your brain dribble out of your ear. What’s more, since I’m the self-appointed manager I’m the one that inflicts this torture on my band-mates, then has to sift through the replies and work out what dates we can play and what dates we can rehearse. This process can go on for several weeks. If I send an email saying ‘I still need dates from X’, X will quite often email me back indignantly pointing out that they replied to that email 2 weeks ago. Oh joy.

This week’s inter-band emails have been all about the set list. We’ve got a half hour slot and we’re not allowed to over-run, so that means 7 songs and me restraining myself and not spending ten minutes in between songs discussing my wardrobe, love life or both. We’ve got a repertoire of at least 25. It would seem that all band members have passionately held views about which are our best songs, and they’re all different. There is going to be at least one song in the set tomorrow that one or more band member doesn’t like. No, of course I’m not going to tell you which one.

Rehearsing
Last night was spent the Cellar of Joy under Earl Mysterio’s batchelor pad in Bethnal Green for our final run-through. Miss Connie Vanderlay joined us straight from the airport, as she’d just flown back from Copenhagen. Trousers and I picked up Kitty Bang Bang en route, who is going to be making a surprise cameo in one of our numbers. We tried to clear a bit of floor space down there amongst the amps, leads and empty biscuit packets for her to practice her routine in – but in the end she just sat on the drum stool and waved her arms in time to the music. Very sensibly, considering the state of the floor. I would strongly advise anyone against doing the splits in there. Most of us band members have mysterious white marks on our clothes from where we’ve brushed against the cellar walls at various times; I’d have hated Miss Bang Bang to leave with a white gusset. She might have found herself in an embarrassing social situation later in the evening.

Press
White Mischief is the only gig I’ve ever done proper grown-up Press for. It was very exciting: I got interviewed for a weekly what’s on e-bulletin called London Le Cool. They asked me two whole questions. I also got photographed for it, sitting on a gravestone in Abney Park cemetery, in full gown and feather fascinator, strumming my pink ukelele. This necessitated me strolling through the streets of Stoke Newington at four in the afternoon in a full length turquoise fringed showgirl gown and feathers, false eyelashes and red lipstick. Not one Yummy Mummy turned a hair at the sight, although I did get a few smirks from the schoolkids on their way home.

Preparation Rituals
We all have our own ways of psyching ourselves up. Trousers likes to dwell on all the things that are going to be a hassle, such as the nightmare parking situation in Kings Cross, and all the factors that might make the gig go badly, such as the fact Honey Mink can’t be with us tomorrow to share vocal duties (she’s in Spain being an Aunty). That way, when the gig goes well in spite of these many factors, he can be pleasantly surprised. Other members of the band, I have no doubt, spend the time rehearsing diligently. As for me, before an important singing engagement I generally have an irresistible urge to smoke. Is this some sort of self-destruct mechanism kicking in? Quite possibly. I have given in to the urge several times over the last couple of weeks, and even went as far as buying a packet of Vogue Menthol a few days ago. Luckily I left them behind at my friend’s flat. I know he will have smoked them before I go round there again, which is good news for my vocal chords. The other thing I tend to do is spend the whole run up to the gig obsessing about what I’m going to wear. Which brings me onto the Big Story of this blog entry:

The New Gown
The Tricity Vogue concept is 50% about the music, and 50% about Dressing Up. When I found out Honey wasn’t going to be able to join me for White Mischief, I decided that to make up for the absence of my sexy partner in crime, I was going to need a gown that had a personality all of its own. This may have been no more than a rationalisation of a primal urge to get a new dress made. My friend “Hollywood” has made two gowns for me before, but the last was two years ago, so I thought it was time I gave everybody something different to look at while I was on stage. How selfless of me… I had an idea that I wanted a dress that looked like flock wallpaper, so Hollywood and I hunted down a curtain factory outlet in North Finchley. There was a coach party of little old ladies there, debating which chintz to get to make a throw for the spare room. Meanwhile, Hollywood was running around like a 6 foot black gay Lawrence Llewelyn Bowen having raptures over brocades and Toile de Jouy, exclaiming at the possibilities for a frock coat here and a leather-trimmed slouch bag there. The staff were initially somewhat wary, warning us that we had to buy a minimum of two metres of any fabric. “I don’t think you understand, we are making a GOWN,” spat Hollywood. When he whipped out his sketchbook and started sketching me pictures of what the gown was going to look like, they suddenly sat up and took notice.

There were some suitably opulent brocades, but many of the colour schemes were too muted for stage wear – then Hollywood had an inspiration – we should make it in black and white. We looked at a huge floral design, and Hollywood worried that it looked too much like a curtain? Then we decided that we would make a feature out of the fact Tricity had made her dress out of a curtain – we came up with a whole story together about how she (that is, Tricity the fictional character, rather than me in real life) had been caught in flagrante in a five star hotel room in the midst of a dangerous liaison, and had had to cover her modesty and take flight in a hurry – so she’d taken one of the curtains with her. With no time to collect her gown before her gig that night, she’d got her friend (Hollywood) to run up a dress for her out of the curtain she’d done a runner in. I suppose it’s an adult spin on the Sound of Music curtain play-clothes idea.

First came the taking of measurements (during which Hollywood remained tactfully neutral about the size of my hips), then it was time to buy the fabric. Hollywood ordered me to buy an extra two metres of the curtain fabric we’d chosen, because he had an Idea for a skirt that would be “beyond genius” and would need a LOT of fabric. Then we drove over to Goldhawk Road to buy red and ivory satin for the lining, and Hollywood also blew £100 on various brocades, chiffons and silks that he found himself unable to leave the shop without; I’ve never seen anyone suffering from Fabric Addiction before; he get so genuinely excited by cloth that he can barely restrain himself from jumping up and down and shouting orgasmically. I got lost driving home and accidentally strayed into the congestion zone, which cost me £60, contributing further to this being the most expensive outfit I’ve ever bought.

Then came the toile fitting – the bit where I get pinned into a plain cloth sheath with all the pleats on the outside, and Hollywood draws on it with pencil to mark where the bodice is going to be. Then the first fitting of the gown itself, where the plan came together before our eyes. We discovered that you could wear the back skirt attachment in dozens of different ways – as a shawl, as a coat, as a matador’s cape. Hollywood confessed that he was so excited about this gown he’d stood his tailor’s dummy up on a chair in the window, so people could see it when they walked past his flat. By the second fitting the bodice fitted perfectly and Hollywood pinned me into the whole thing then marched me out onto his front step so he could take photos. The ASBO youths across the road shouted cheeky remarks such as: “It’s Amy Winehouse… Gone Wrong!” Hollywood was dismissive: “Do you see me paying them mind? Pay them no mind, they don’t know genius when it’s before their eyes.” Holloway has never before witnessed such glamour. 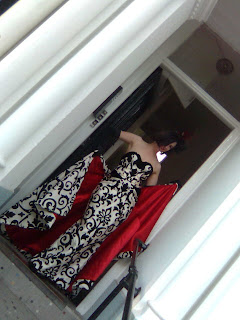 Yesterday morning the postman delivered the bespoke fascinator that I’d ordered from Caroline Mitchell Millinery – in an enormous box extravagantly packed with tissue paper and bubble wrap. A pair of black suede shoes have been acquired on sale in a Covent Garden shoe shop. And the final piece of the puzzle fell into place at the jewellery stall in Kingsland shopping centre yesterday – one giant pearl necklace, in exactly the same shade of ivory as the gown. Glamour triumphs, even in Dalston.

Now it’s 9am and I’m writing this because I woke up far too early and couldn’t get back to sleep – but now I have to go, because Hollywood is already awake too, and has summoned me for final fitting, pressing and collection this morning.

The gown will be making its debut at 10.30pm tonight on White Mischief’s second stage upstairs. I believe it is no more fabulous a visual aid than our music deserves. Come and have a look at the loveliest thing I have ever owned. And stay for the cheeky jazz. 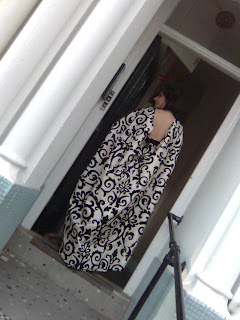 Posted by Unknown at 9:39 am No comments: