The Case of the Missing Nipple Tassels 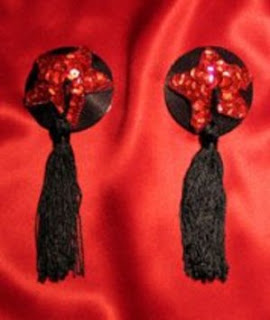 More tales from the dressing room

One Burlesque’n’Blues night at Volupte, panic breaks out in the dressing room. Marianne Cheesecake has forgotten her nipple tassels. First she asks the other burlesquers, but neither Vicky Butterfly nor Chrys Columbine have brought spares. They briefly contemplate sharing but realise this is technically unfeasible, given the turnaround between their acts and the amount of time it takes the glue to dry. So Marianne is left with three choices. Either 1) she stops her act short when the bra comes off, turns her back on the audience and finishes her turn there, 2) She gives everyone more of an eyeful than they bargained for, or 3) she finds something else to construct temporary pasties out of.

Marianne decides to go for option 3. Ever resourceful venue owner Delores Von Cotier is applied to for assistance, and produces two round plasters to go over Marianne’s nipples. This at least ensures the licensing laws will not be flouted. We all get very enthusiastic about using gaffer tape until the harsh reality of that nasty black stuff is right under our noses. Marianne quails visibly at the thought of sticking it to her tender extremities. Misses Butterfly and Columbine are full of advice about the best way to remove gaffer tape from the body – the consensus seems to be that it will hurt like hell whatever way you do it, so your best bet is to rip it off quick. All this sounds worse than waxing. A more gentle alternative, that of fashioning star shapes out of the gaffer tape which can then be stuck on with normal pastie glue, seems like a better idea in theory. I set about trying to make some little black stars out of gaffer tape. They look shit. Marianne very politely declines to affix the two wonky bits of black cack onto her nipples. The Blue Peter team’s jobs are safe.

In the end Marianne comes upon a brilliant solution off the cuff when she’s on stage doing her act. Marianne’s act for Burlesque’n’Blues involves shambling onstage dressed as a little old lady, carrying ‘Grandma’s Songbook’. This she plonks importantly down in front of Pete Saunders and instructs him to play. Pete bursts into Anything Goes, and Grandma starts to strip, to the consternation of the audience, who didn’t sign up for an edgy ‘alt-cabaret’ experience, and are not too thrilled at the prospect of septuagenarian nudity. To their relief, however, once the wig comes off, and a few more cardigans, Marianne is revealed to be a nubile young lady after all. Those of us in the know wait with baited breath for the climactic moment of the routine. How will Miss Cheesecake manage without her nipple tassels? What she does, very cleverly, is grab Grandma’s Songbook from the music stand as soon as the bra comes off, clutch it to her chest, and run off stage with her opening prop pressed back into service to finish the act. I think that’s what they call narrative closure. In fact, it’s such a good idea that I think Marianne should do the same thing every time, whether she remembers her pasties or not.