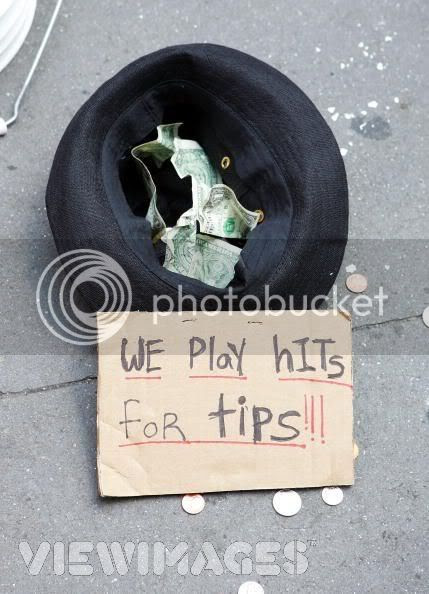 I love everything about hosting open mic nights for singers at the Live Lounge and CellarDoor... except for one thing.

The pianist and the host play for tips, so part of my job as the host is to sweetly cajole and/or strongly pressurise the audience into throwing some money into the hat. And I have to do this several times during the course of the evening. The relatively cowardly way to do this is to send the hat around the tables by itself while I sing a song which is hopefully so entertaining that the audience willingly dig deep into their pockets.

However, I have noticed that a lot of coppers end up in the hat this way, because people feel that for appearances sake they should put something in, but they don't really want to part with their dosh, so they put 1p and 2p pieces in. But this is worse than putting in nothing at all. Not only do the coppers weigh the hat down, thus impeding ease of passage around the room, they also encourage other people, who see the coppers in there, to put more coppers in themselves. And not only that, guess who is stuck counting the 1p and 2p pieces for half an hour at the end of the night, sifting through them hopefully looking for missed pound coins? Yours truly.

A tactic used by godfather of cabaret Mr Paul L Martin is to publicly shame anyone who doesn't donate, by pointing them out to the rest of the audience, and explaining to them that if they are enjoying to the evening's live entertainment, they should give money to the people who are providing that entertainment for them. And if they're not interested in the live entertainment, they should leave and find another bar where no one is singing their hearts out in front of their noses. This strategy frequently results in people leaving, rather than in people putting money in the hat, however.

The best way I've come up with so far to make people put proper money in the hat is to go round and stick it right under their nose in person. Nobody puts 2p pieces in when you're watching them like a hawk, it's almost uniformly pound coins, or even fivers, if you're lucky. It's nice if someone else will do this on your behalf - a friend, or one of the bar staff - but you generally get more if you do it yourself. So far I haven't directly confronted any of the people who have pointedly ignored me, or pretended they've already put money in when I know they haven't, but I have to say that my confidence is growing, and I've noticed that the more shameless and unembarrassed I am about asking for money, the more I get. "Please donate to the Starving Musician's Cocktail Fund" has been my most successful line as yet. It's only a matter of time before i'm having a face-off with some reluctant donor or other and asking them if the live music going on under their nose is interfering with their quiet evening out, or whether it is, in fact, contributing to their enjoyment in any way, in which case they should show their appreciation.

I once lived in Sri Lanka (where I also started my singing career, singing jazz in the five star hotels) and it took me a long time to get used to the constant barrage of beggars who would appear as if from nowhere as soon as I stepped outside my door (and sometimes even before I'd stepped outside my door). Street beggars who'd lost their arms thrusting their handless stumps through an open car window into my face was the most disturbing experience I remember. At first I reacted to this experience of everyone constantly wanting a piece of me by giving nobody anything. This was a pretty common initial gut reaction amongst all the other expats as well - we felt assaulted by these intrusions into our privacy, by the rudeness and apparent hostility of it. But I noticed when I was out with affluent Sri Lankans that they would give automatically without even thinking twice about it. In Sri Lanka, giving to beggars was like tipping in restaurants: just something you do, to maintain the economic system you live within.

And now I find myself on the opposite side of that equation, at a time of life when I expected I'd be financially secure, instead of which I'm the one holding out the begging bowl. When I'm passing the hat around at an open mic night, I sometimes get unnerving flashbacks to those handless stumps being waved in my face through a car window in Sri Lanka.

Being a performer gives you an odd sort of status. On the one hand, people are often admiring, and complimentary, and you certainly get more ego boosts than you do in most other jobs. On the other hand, you are just as often viewed as someone in a servile role, who is there for the entertainment of the audience, the hired help, and therefore low status. Ironically, in my experience, the more you are paid for a private function, the more you are ignored or treated with disdain by the guests. So, to persevere as a performer, you must be resilient to rapid, unexpected, and unpredictable swings in status, from god to serf and back again, sometimes several times in one evening. Apparently Buddha said it was good discipline for anyone on the road to enlightenment to experience periods of both high and low status in their life. I can see how it could help to polish you into a fine, humble and generous spirit - although it is just as likely to leave you a neurotic bag of nerves.

So how to overcome this status neurosis and steel myself to ask my audience to pay me for my performance?

I suppose at the end of the day it's about how much I value my own and my colleague's work: because in life one generally gets what one thinks one deserves (rather than what one really deserves. This is one of life's great ironies, but also one of life's great secrets. Once you're in on it, your path will be strewn with rose petals. Probably. )

I know that my colleague on piano is working his socks off performing musical feats that I could never dream of accomplishing (even if I could play the piano) - sight reading 10-page-long musical scores, transposing keys on sight, and vamping around a singer who's lost their place until they find it again, without drawing attention to the fact. He's earned his money all right, which is why I owe it to him to get as much as I can out of the crowd. I also know that I'm working hard to make the evening fun for everybody in the room, and that's no mean feat either, so I deserve my half too.

Hosting an open mic night can be a delicate balancing act. Sometimes pleasing the would-be singers by giving them several opportunities to sing is not pleasing the audience, who want more variety, and don't mind one or two rather more experimental or charmingly unpolished performances, but find their patience wearing thin if required to listen to too many of them. Sometimes taking on a roomful of drunken partygoers is like walking into a bear pit - although you're just as likely to find yourself being playfully stroked by the bears as you are being savaged by them. However, drunk bears can play rough without even realising they're doing it, so you're also just as likely to come out bruised from copious effusions of affection.

Sometimes nobody in the room is interested in anything other than their own performance, and twitch impatiently through everyone else's turns until they can get behind the mic themselves. Singing to this type of crowd, as host, is terrifying, because you are supremely aware that your technical vocal abilities are being judged by a highly-attuned critical ear, and, worse, with that sort of why-not-me attitude that is impossible to please except by making it their turn as fast as possible. Which is generally my strategy in these situations. And when I do come back on to sing at the end, it's usually to lead the room in a singalong - which is another cunning strategy to deal with overly-critical listeners, because they will be far too busy concentrating on their own performance to worry about mine.

But when the night works - and this is what I'm beavering away to achieve, by working the room and smiling and chatting to everybody, and trying to find out what their musical dreams and ambitions are, and giving them a gentle nudge up to the microphone if they need it - when the night works it's magic. About 10 times more magic than just playing a gig yourself and having people just sitting listening to you. Because you're all part of something together: a night of musical discovery where new voices have been heard and people have exposed themselves on a microphone for the first time and discovered how exciting it is to make yourself vulnerable on stage for an audience. And even the people who've discovered how emotionally eviscerating it is to make yourself vulnerable on stage for an audience have been lifted up by the love in the room and made to feel better about the fact they sang the whole of Girl From Ipanema in the wrong key. Because no one is more gentle with performers than other performers. Because nobody knows better than other performers how hard it is to get up there and sing the right notes, and the right words, in the right order, and most of all to be yourself, amplified.

When the night works, it's priceless.

And those are the nights we get the most money in the hat.