Playing with the Big Boys

Stories from the Volupte Dressing Room

Every time I step inside the doors of Volupte it’s like walking into the plot of a movie. Usually one of those saucy 60s comedies with Brigitte Bardot or Peter Sellers in. So I’ve decided this material is too good to waste and it is my duty to share it with you.

A partyloving burlesque beauty staggers into the dressing room to get ready for the night’s show complaining that she’s a wreck. She didn’t get in until two. And by that she means two this afternoon. I ask her where she’s been and she tells me the whole story. And then she says she probably shouldn’t have told me, but she’s just hopelessly indiscreet by nature. Unfortunately for her, it’s not in my nature to let a good story go to waste either. So I’m going to keep this burlesque beauty and her partner-in-crime anonymous by calling them Q and T (QT – see what I did there?). Q managed to get on the guestlist for an exclusive club, so she called up T and told her to don her glad rags: they were going out to play. (T, incidentally, had been telling me only the week before that she was a bit worried about Q because she was partying so hard at the moment. I’m guessing that was why she felt obliged to go along with her: to make sure she was okay.) Q and T get chatting to some well-heeled American guys who turn out to include a Texan oil baron, and who keep Q and T supplied with champagne all night. When, eventually, the exclusive nightclub closes its doors, Q and T make the Texan oil baron and his friends take them out for food. After the food they are reluctant to call it a night, but luckily the Texan oil baron reveals he still has a mini-bar in his suite at the Dorchester that will keep Q and T in booze for a bit longer. And that’s where Q and T stay until 2pm the following afternoon.

Q remained faithful to her boyfriend, despite her inebriated state (I believe Q’s boyfriend is a drummer, and it’s probably wise to stay faithful to any boy who hits things for a living), but T, who has recently rejoined the ranks of the unattached, indulged herself in a cheeky snog with the Texan oil baron. To T’s surprise, when she and Q left, the Texan oil baron pressed two thousand dollars into her hand ‘for the taxi’. I commented that it would be rather inconvenient to have to take the notes to a bureau de change before hailing a cab, but Q added that he had also given T a fifty pound note in addition to the two thousand US dollars. T had immediately instructed Q to tell no one this story, because she felt somewhat concerned that people might misconstrue the circumstances and think that she was now charging for snogs, whereas, in fact, the snog had been endowed with no thought of renumeration of any kind, as all the best snogs are. Q was mainly disappointed that her noble fidelity to her drummer boyfriend had meant that no notes were pressed into her own hands on departure. However, she was quite satisfied with the quality and quantity of free booze she had consumed courtesy of the Texan oil baron, although she did find it necessary to nip out to Sainsbury’s and get herself a bottle of Magners cider to put the zing back in her step before she could go on stage and do her thing.

I was filled with admiration for the colourful adventure Q and T had succeeded in having. It also occurred to me that their tale would make Beloved blanch, as it was precisely the sort of scenario he dreams up whenever I am late home from a gig and forget to text him, although all I ever get up to is a lengthy discussion about favourite artists with a (generally female or homosexual) cabaret comrade. No, these saucy tales of the Volupte dressing room were for me to listen to, not participate in.

Or so I thought.

Story number 2: The Riding Crop
Last Friday I was on the bill of Volupte’s Friday Follies, hosted by the blonde, dashing, and (tragically for the ladies) homosexual Mr Dusty Limits, who had brought with him a diamond encrusted riding crop to assist him in his role as Master of Ceremonies. It certainly came in handy for threatening the first house’s chatty audience into submission. I was also delighted to be asked to mind the crop while Dusty performed a number later in the show.

I gave it a couple of practise swishes. I feel quite comfortable holding a riding crop because, like many teenage girls, I went through a big pony-mad phase between the ages of 9 and 13. I was a very nervous rider, so I always got the laziest pony to ride, since there was no risk of him galloping off anywhere with me on top of him. Major, he was called, and he was a skewbald, although a skewbald what I’m not sure. To get Major to do anything more than amble, or stand stock still, it was necessary to carry a crop when riding him. I never actually had to hit Major with the crop; all I had to do was raise it threateningly, as if I was about to hit him, and Major would burst into a trot. For about ten paces. And then he’d go back to ambling again. I think I got my riding crop from my granddad who was an antiques dealer, and who seemed to be able to acquire most things required by my various childhood obsessions (including an antique bakelite recorder which was out of tune, but that’s a whole different story). My old crop’s probably still in the loft 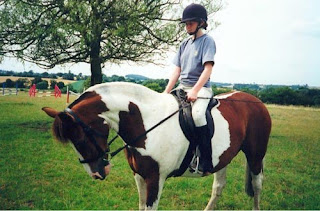 at home, with my riding hat (which my parents had decided it was probably safer to buy new rather than apply to my granddad for). But now here I was with a riding crop in my hand once more. I felt quite disappointed to have to give it back to Dusty.

After the first show, as I was about to head to the kitchen for my dinner (pasta and Bolognese sauce, courtesy of Cheffy) two gentlemen in the audience hailed me over. One of them explained that it was his 40th birthday and it would really make his night if I would spank him with the riding crop. I graciously told him I would think about it and retreated to the kitchen immediately, where I shared the story with Dusty, expecting him to laugh and think no more of it. Instead of which he calmly handed me his diamond encrusted riding crop.

So I went back out into the restaurant (followed by Sir Fitzroy Callow, Miss Connie Vanderlay and Volupte’s erstwhile soundman Steve, who couldn’t wait to see if I’d go through with it). Birthday boy obligingly got out of his seat and knelt in the alcove on the stage, presenting his rear end to me ready for a taste of the whip. I suggested his friend take a picture, but his friend complained it was too dark and there was no flash on his camera phone. Probably, in retrospect, this was just as well. I pretended to hit him, but instead passed the whip to his mate, who gave birthday boy a jokey thrashing. I thought this would suffice but birthday boy was adamant: he wanted me to whip him myself, just once. I backed up to give myself a good run up, thinking this would add to the comedy value, then ran over and whacked him. He was dewy eyed with gratitude.

I felt rather hot in the face as I retreated to the kitchen and returned Dusty’s crop. My trio of watchers wondered loudly if Beloved knew about this side of my nature? But, as I have so carefully explained with my anecdote about Major the pony, riding crops are for me objects with purely innocent childhood associations, and not in any way sexual.

In any way. Whatsoever.