I was doing so well... I'd managed to completely give up smoking and I'd lasted a good six months... and now here I am chuffing away again.

It's classic self-destructive behaviour. I've got two important gigs coming up next week: one of them we're going to film, so I want it to be note-perfect and pure honey-coated sound, and the other one I've got to sing without a microphone, so I'm going to need my full lung-power.

And just when I need my lungs at full capacity, and my voice crystal clear, I'm hijacking my bronchial system with smoke and tar.

Yeah yeah I know that some people like to hear a bit of 'hard living' in a jazz voice, but I haven't really got that sort of voice. Much as I'd like to sound like Billie Holliday, I know I'm more like Doris Day in her squeaky clean phase... and you've gotta play to your strengths. Apart from which, if I've been caning it with the tobacco, I can't sing to the end of a 45 minute set without running out of puff. And breathless panting, although it can work in some contexts (Brigitte Bardot in Je t'aime, for example) is not really appropriate for my material...

Even while I'm writing about how terrible it is for me to smoke, I'm getting cravings to roll another cigarette. What's that all about?

I've noticed that pretty much every singer I ever meet is a smoker - including Honey Mink, who is similarly wrestling with her addiction at the moment. She smokes Marlborough Reds, which is properly hardcore. And they look great in a cigarette holder too. My own personal predilection for roll ups doesn't go with my image at all - another reason to knock it on the head - plus they leave orange stains on my fingers. Yuk.

And when I brush my teeth after I've been smoking, they feel really sensitive. And then there's the foul taste you wake up with in your mouth. It's so much nicer to feel clean, inside and out.

All in all, it's a no-brainer.

So why am I still eyeing that packet of Amber Leaf with pure longing...?

Flicking through the Guardian job pages yesterday, in the vain hope there might be a job vacancy entitled: "Jazz Diva Wanted", the talk turned to our fantasy jobs.

Beloved has decided he quite fancies becoming a Private Detective. He's imagining it will be a glamorous modern day version of a Raymond Chandler novel, and he'll get to drink loads of whisky and play with high tech gadgets. Me and his friend Jason reckoned it would be more about sitting in cars watching houses and having to tell distraught spouses that their husband/wife was doing the dirty on them, and that he'd be bored out of his skull and/or an emotional wreck within a week.

The suggested alternative job for Beloved was Supervillain. He quite fancied sitting in a big swivel chair with a cat on his lap, but Jason reckoned a more appropriate prop for him would be a Mini Me. The perks would be good - an immense fortune, and an underground swimming pool stocked with sharks - but then we decided it would probably be quite stressful because Supervillains were never satisfied until they'd achieved Total World Domination, and they never get that because some heroic secret agent usually throws a spanner in the works.

Then the talk turned to real life bizarre jobs. Beloved had once read about a job vacancy to throw frozen chickens into a jet engine. We discussed whether the fact they were frozen would give an inaccurate result, since real birds flying into a jet engine wouldn't actually be frozen at the time, and whether you would also have to defrost them in a microwave before you lobbed them in.

Jason had heard there were actually job vacancies for Horse Masturbators. Because apparently throughbred racehorses are far too precious to risk letting them copulate as nature intended. He wondered whether confusion might arise in social situations: "No, sorry mate, I only do horses."

My dream job would be "shopping researcher". I would be given a lump sum of cash - say, £1000 a day, to go out and spend, and report back on my purchases.

I reckon we should start an Ideal Jobs web-page, where instead of having to apply for real jobs, which always sound boring as hell (Communications Manager for Pest Control Magazine), you could write a job description for the job you'd actually really fancy doing, and then see if anyone got in touch and offered you the position.

I'd like to propose to my readers that we start the ball rolling right now. Let's have your Job Descriptions please...

xx
Posted by Unknown at 5:58 pm No comments: 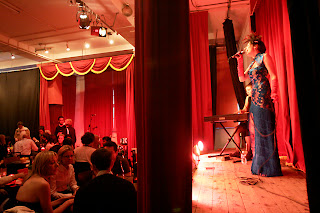 I didn't know what the word 'eschatalogical' meant until recently, and now I do I thought I'd 'try using it in a sentence today' (as Cher says to her protege in Clueless).

Regular readers will be relieved to learn it is nothing to do with scatalogical adventures, which are not something I would ever go in for, and even if I did I certainly wouldn't write about them in my blog.

Eschatalogical means relating to the end of the world - which of course, I was performing at on Friday night. It's quite weird attending the end of the world on a weekly basis, but in a nice way. I managed to stay and watch the whole show to the end this time, and it was brilliant - particularly the guy juggling a glass ball and making it look like it was floating by itself - that was mesmerising. In a way, though, it's the audience contribution that really makes the show - they email in loads of stuff before the show, like songs they want to hear in their last two hours on earth, and any regrets or secrets they want to get out in the open before armageddon strikes... and if i was gonna bare my soul before the end of the world, I can't think of a cuter man to do it to than Alex Zane. Of course, when I say 'cute', I mean that in a purely platonic way... and I do of course mean 'bare' in a purely metaphorical way. Of course. 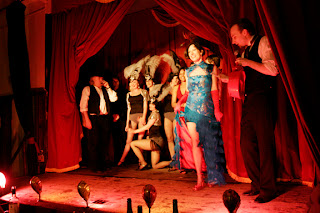 This week I followed up the End of the World with a cross-London marathon to Vauxhall, where the Dark Prince of Cabaret, Dusty Limits was hosting the debut night of new cabaret show, Le Phreeque, at the Royal Vauxhall Tavern. The place was bristling with Burlesque icons, rubbing shoulders with party boys, men in white coats - and puppets. I loved the puppets. My favourites were the giant disembodied mouths who came on stage as backing singers to a lipsynching act. I'm not sure if it would be accurate to describe it as a drag act - it was a pretty out there costume, but there was no question of the performer's manhood, given the size of his stainless steel codpiece. He particularly enjoyed reflecting laser beams off it in the course of his number.

Dusty threw in a few special effects of his own, including snorting white powder from a mirror live on stage through a rolled up 5 euro note, to lend modern-day verisimilitude to his colourful rendition of Kurt Weill's Alabama Song. He told me afterwards what the powder really was, but I'm sure I'm not allowed to reveal his professional secrets, so I'm not telling you whether it was what you're probably thinking it was, or not.

My night ended in style when the divine Miss Roxy Velvet gave me a lift all the way home to Stoke Newington. She had to move a nurse's medical screen off the back seat specially to make room for me - and manipulating metal poles and rubber sheeting is not easy in the dark in six inch silver lame heels - but the sight of a glammed up burlesque queen wrestling with her props by the side of the road has become one of those bizarre sights which I now think of as entirely normal in the curious cabaret world I've been inhabiting of late.

Roxy was due to run the London marathon on Sunday, and she's managed to raise nearly £1500 for Shelter. She'd been eating nothing but pasta and potatoes all week in preparation, and was nobly necking back the pineapple juice all night - but she was as excited about the run as I get about a big show. I can't wait to hear how she got on.

After spending Friday night at the very apex of Gay London, I spent Saturday afternoon at that bastion of heterosexual masculinity - watching the Arsenal Tottenham match in the pub with Beloved. Okay I can't pretend I know anything about football - or care - but it was quite exhilarating being in a roomful of excitable testosterone. I liked the chants - they were even quite tuneful in places.

Sunday was more live performance chaos - this time at the first birthday celebrations for Lost Society in Camden. So I made my own little trek across London north to south, while all the marathon runners were on their East to West axis. I would like to thank Transport for London for choosing this Sunday in particular to close both the Northern Line Bank Branch and the Victoria Line between Victoria and Stockwell. Nice one. I staggered into Lost Society brandishing my slightly battered pink ukelele case with only minutes to spare before I was due on - and then hung around for 45 minutes anyway, while the band due on after me lugged their gear up on stage. It was mayhem in there, mainly because everyone had been knocking back free cocktails since 2pm. Not necessarily the gentlest and most attentive environment to try a cute and quirky little turn with me pretending I'd been dumped by my big band and attempting to recreate the same musical effect with one tiny pink ukelele and a kazoo... I'm glad Connie and Fresh were there to lend moral support - although I did get lots of warm kind words afterwards, even if some of them did involve the word 'brave', which i generally think is a bad sign (it means they could see the fear)... and Connie said she'd never seen a kazoo solo go down so well before...

I stuck around to watch Miss Vicky Butterfly perform her butterfly strip an hour later - since a couple of the audience had already invaded the stage to give impromptu pole-dancing displays I felt rather concerned for her modesty, but luckily her butterfly costume had an 8 foot wingspan and some fairly scary metal rods on the ends of her arms, so everybody was sensible enough to keep their distance. And even when the music cut out seconds before the end of the act, it only added to the performance - because it was just at the moment Vicky was about to reveal the butterfly pasties affixed to her bosoms. What could possibly have distracted the sound man at exactly that moment I wonder?

And finally I'd like to congratulate Tryg, our host and entertainer extraordinaire last night, for holding his own despite the onslaught of obnoxiously drunk Clapham Bunnies trying to grind him and steal his microphone to announce to the assembled crowd that it was their mate's birthday and she was a whore.

So there we have it, another weekend of strange and wonderful occurrences on London's live scene. You couldn't make it up.

xx
Posted by Unknown at 7:46 pm No comments: