"Songs For Swinging Ukuleles" at the Not Television Festival, Chelsea Theatre, 30 August 2014

"Tricity’s show, Songs for Swinging Ukuleles, marks the flowering of a longstanding interest in man-drag: earlier in the year, she chopped off her very long hair and bought a very nice suit and the rest is history. It’s a charming suite of songs, a slow-burner that eases you in with a couple of saucy call-and-response numbers about swinging of various kinds then starts to soar. It reaches a dreamy new plane with an infectious waltz about joining the circus (enhanced by audience bum-bum-bumming along), goes dark (red bike light excepted) for a bedroom thriller, tugs the heart with a love song of impossible simplicity then sends you out with a foot-stomping anthem backed by volunteer voguers. Throughout, there are opportunities to lend a hand, in gentle yet essential ways: singing along here, using keys and change as percussion there, being dragged on stage to do drag on stage for a couple of brave souls at the end."
Ben Walters, nottelevision.net

"Songs For Swinging Ukuleles" at the Edinburgh Fringe, 1-17 August 2014

Here are some audience and published reviews for my solo show, 8.45pm nightly in the Lounge at Laughing Horse @ The Counting House. Full show details here:


“Full disclosure: I’ve been working alongside Tricity Vogue for a couple of years now, and this year had the honour of being the technician for her show, Songs For Swinging Ukuleles. Consequently, this meant I heard each of the nine songs in the set sixteen times, which some might consider a way of killing any kind of music. Repetition might satiate that fix you need to hear a hook again, but it can kill even the best songs.

And yet I would wake up every August morning with one of the songs from Swinging Ukuleles playing in my head, and I would still be happily singing along later that evening when watching the show. It’s a testament to Vogue’s songwriting skill, crafting a set of songs that are friendly, catchy, humorous, and lasting beyond the end of the show. In most cases I’m not one for live albums, but with Swinging Ukuleles, I have come to relive the live experience over and over, enjoying the audience participation or additional backing vocals and, consequently, would love such a product to come about. Indeed, even Vogue seems to thrive with a live audience before her. A small crowd of people who sit, smile, and won’t turn their noses up at some audience participation seems to be the impetus that allows Vogue’s personality to shine.

Transferred into studio time, though, the songs are a delight. Though just Vogue and her ukulele, the sonic effects play a key role: On “The Bedroom In A Dangerous Place” Vogue’s voice is affected to sound like a muffled trumpet in the dark distance; and the cheeky yelp on “Bad Showgirl” is a delightful detail. But sweet numbers like “Run Away And Join The Circus”, the alliterative double entendre of “My Favourite Fanny”, or the delicate “I Spent The Night With You” stand on their own. She slides between personal intimacy and rousingly relatable choruses at the flick of a wrist. All this might be criticized as being the subject of bias, but I’m not lying when I say that weeks on from the last performance of Songs For Swing Ukuleles, I still wake up in the morning to the chorus to “Don’t Let Them Drag You Down” playing in my head.”
Ray Finlayson, Unrecorded


“Bowled over by Tricity Vogue's ingenious mixture of her own songs coupled with costume flair (loved the suit!) on the theme which amusingly explored gender. She cleverly entertained us with a collection of original lyrics on varied topics from 'Swing' with delightful sexual innuendos, through educating us on alliteration (focussing on 'Fanny'!) and scary tales of nightmares, whilst allowing us to evocatively share her personal experience and romance. All the while the audience was happily drawn in and encouraged to participate by her spontaneous warm and witty interaction with them, singing along with choruses no more taxing than "Bum,bum,bum!! The tunes resonated and entertained and we all loved it. This was a consummate performance. Miss Vogue you are a star.”
Jo Millar via Edfringe.com

“Great show, great entertainment. Audience very happy to 'bum' along! Also wonderful ukelele playing - better than other ukelele players charging much more in the fringe... Enjoy the circus! Thanks!”
Fiona and Aileen via Edfringe.com

“It don't mean a thing if you ain't got that swing... And Tricity NEVER fails to disappoint... With more witty self-reinvention than Madonna ever envisaged, and command of her small instrument, she will woo the crowds at the Fringe once more with her delightful one-woman show. We sat in a first night throng, overflowing from the small room, in sweltering heat, but even that could not dent the lady's 'cool'. It was a charming delight of a show. And the singalong chorus from the Circus song had everyone happily 'bumming along'... For days afterwards in fact, as my hosts could not stop singing and at any given moment that refrain would be trilled along to. Gorgeous. And as ever, hilarious, and poignant too. Tricity takes you on a journey. And you will only ever leave entertained and upbeat. And that, in the world at large at the moment, is a gift. Keep strumming, you talented plucker, you. :)”
Amelia Clark via Edfringe.com

“Tricity Vogue is one of those performers who I would travel anywhere to see, Her Songs are Beautiful and memorable, I have been singing them in my head all week now...”
Steve Mackenzie via Edfringe.com

“I turned up at this show and was greeted by the most charming lady herself in a three piece suit. She looked so cool. Before the actual snow started Tricity was charming the audience with her cheeky ways and hit. The show itself is a delight. It went by too quick as Tricity played her funny and catchy tunes and encouraged the audience to join in with her, which I find always such fun.”
Clive Holland via Edfringe.com

“The sheer number of shows at the Fringe can make it hard to truly find a niche, but Tricity Vogue has managed it with her ukulele drag cabaret. Playing songs on a variety of themes, it’s impressive how much enthusiasm she’s able to eke out of the cramped room her audience were up for it within minutes. Vogue involves them in almost every song: two people are hauled up as drag backing dancers, one is the object of a love song and another provides atmosphere by holding up a bike light (why yes, this is a free show!). Vogue ends on a number from an in-progress “drag action musical” that I’m now desperate to see. A storming slice of cabaret.” ****
ThreeWeeks

"Great show this evening, loved it!
Came away thinking about 3 things: Victor Victoria (predictably); Regina Spektor (your scary night song); and Chaucer\'s Wife of Bath:
Gat-tothed I was, and that bicam me weel;
I hadde the prente of seinte venus seel.
As help me god! I was a lusty oon,
And faire, and riche, and yong, and wel bigon.
Good luck for the Uke of Edinburgh... "
Fiona via email

“Tricity Vogue, well known for her cabaret shows accompanying herself on the ukelele, has staged a preview of her new show to be taken up to the Edinburgh Festival.

Playing with the concept of cross-gender and drag, she dresses up in a beautifully tailored suit and, displaying great commitment, sports a slick man’s haircut – cut live on stage in a previous show at the same venue.

Songs for Swinging Ukeleles consists entirely of her own compositions, with anecdote and changes of costume, at one point re-applying her own shorn hair. The atmosphere created evokes a feeling of 1920s Weimar, though with less of the darkness associated with that era, and is refreshingly light and charming.  The theatrical effect takes us gently into another world where we willingly suspend our disbelief.

As the title suggests, she sings of swingers (both of the sexual and dance kind), showgirls, sartorial elegance, love and her fear of joining the circus- she has been invited by a French one, it transpires.

Throughout the show, Vogue uses various devices to keep the audience participating and investing in the piece, and such encouragements are subtly and playfully done. She is a very engaging performer, cheeky without being crude and quite delightful.

The standout items, though, were the ones that struck a different note.  The song on nightmares changed the tone of the piece reaching a deeper level, demanding a greater degree of attention, and her ballad on a date starting as a one-night stand and leading to a declaration of love added contrast.

The preview was performed in a South London pub, the Royal Vauxhall Tavern, on one of the hottest nights of the year, thus attracting very little audience.  Nonetheless, Vogue was able to sweep the small rather disparate group along and it was clear everyone had a very enjoyable night.
Both Vogue and the show deserve bigger crowds up in Edinburgh – she should do well.” 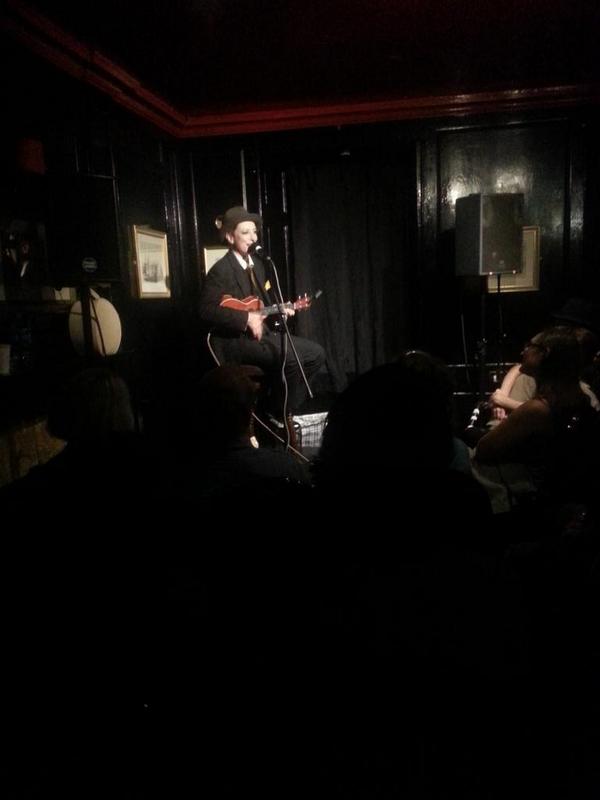 
The sheer number of shows at the Fringe can make it hard to truly find a niche, but Tricity Vogue has managed it with her ukulele drag cabaret. Playing songs on a variety of themes, it’s impressive how much enthusiasm she’s able to eke out of the cramped room her audience were up for it within minutes. Vogue involves them in almost every song: two people are hauled up as drag backing dancers, one is the object of a love song and another provides atmosphere by holding up a bike light (why yes, this is a free show!). Vogue ends on a number from an in-progress “drag action musical” that I’m now desperate to see. A storming slice of cabaret.
Laughing Horse @ The Counting House, until 17 Aug.
tw rating 4/5 | [Jon Stapley]
- See more at: http://www.threeweeks.co.uk/article/ed2014-cabaret-review-tricity-vogue-songs-for-swinging-ukuleles-tricity-vogue-free-festival/#sthash.HvU5daLj.dpuf

"Our thanks to the funny, flirtatious and frankly 'fenomenal' Tricity Vogue. Another winning show."
Anne-Sophie & Emma-Jane Dallison

"Tricity Vogue's show is great fun. It's glitzy and glam with catchy songs and lots of opportunity for audience participation. A definite must see!"

"What A Show, What A Gal, What A Great New Look… Tricity Vogue: Sharper Than Ever!"
Alastair Choat, Landlord, Coach & Horses

"Your manner is so fun, you can get away with anything."
Heather Uprichard

"I really enjoyed your show and was glad I went. It had a genuine Music Hall feel with a modern twist. You are clearly a talented player of the ukulele and singer. I particularly liked the audience participation elements - it was great fun and perfect for the venue and size of audience. Your play on drag and gender was very tastefully done and I thought you looked fantastic - the make up must take some practice!"
Rachel Bull

"Tricity vogues new show  "Songs for Swinging Ukuleles": it's not what you think, it's even better. You'll have the most swinging, tuneful, fun-filled night you can have with your clothes on. Tricity Vogue is cabaret's answer to Eurovision, but wth so much better songs. She's part showgirl, part sharp dressed lady in a mans suit (without a beard!). This is a show that make you want to swing and sing and laugh and smile. Tell all your friends about it. Don't miss."
Clive Holland

"Loved the show... you create such a special atmosphere. I came away with a lovely nice glow."
Pete Saunders