Bad Girls at the Ball

As the Blue Stocking Society prepare for their Bad DebutanteBall on 23 November 2011, co-founder Tricity Vogue hunts down some real-life bad debs.

A debutante is a young lady coming out into society for the first time. Until the 1950s, the female offspring of the British social elite were kept under wraps at home or in all-girl schools until it was time to unleash them on the marriage market, like prize heifers. And then they were dolled up in white dresses and paraded for the duration of the Season, by the end of which, hopefully, they’d be snapped up by a husband.  The social season ran from April to July (so as not to clash with the hunting season), and smart families would take a house in London to attend a round of luncheons, tea parties, and, of course, balls. 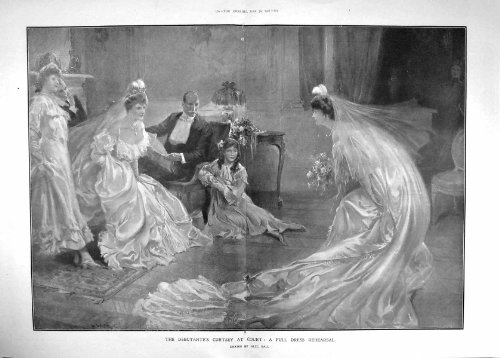 The Debutante Season kicked off with the presentation of the young ladies at court. Only a lady who’d been previously presented herself could present a debutante to the monarch (to keep out the riff-raff), and the dress code was rigorous. Strictly white dresses only, or, at a push, ivory or pale pink, with three feathers in the hair, to represent the crest of the Prince of Wales. Young ladies took punishing lessons in the court curtsey, a particularly convoluted manoeuvre, which also had to be conducted at the same time as walking backwards out of the royal presence.  In Victoria’s reign, the heyday of the debutante, the girls and their escorts had to wait for hours in drafty corridors without food or water, or access to the lavatory, for the privilege of kneeling before the queen and kissing her hand. The ordeal sounds uncannily similar to today’s Britain’s Got Talent auditions. 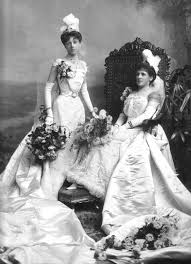 The Decline And Fall Of The Debutante Ball

It was the current queen who ended court presentations in 1958, claiming the practice was undemocratic. Her less tactful sister Princess Margaret was said to remark "We had to put a stop to it - every tart in London was getting in." Undaunted, the society mothers came up with an alternative ritual. At the annual Queen Charlotte’s ball, which traditionally kicked off the season, a bevy of debutantes, pulling on ribbons, towed a lavish tiered cake into the room. An obscure European royal was installed next to the cake on the dais, and the rest of the debutantes approached the platform and dropped their curtseys. The presence of the token royal was of course to deflect the all-too-obvious pagan implications of virginal girls paying obeisance before a huge phallic object, which they would later eat. Coming-out pageantry corralled high society young ladies down the track their elders had decreed for them: straight out of finishing school and into marriage, after one brief summer of shopping for partners. The eligible young men lined up for them were known as ‘debs’ delights’; although girls approached the romantic possibilities of the season with their eyes open. In her book Last Curtsey  (http://www.amazon.co.uk/Last-Curtsey-Debutantes-Fiona-MacCarthy/dp/0571228593) debutante-turned-literary biographer Fiona MacCarthy records the secret acronyms debs devised between themselves for their various beaux: MSC (“Makes Skin Creep”), NSIT (“Not Safe In Taxis”) and VVSITPQ ("Very, Very Safe In Taxis, Probably Queer"). At some point, a deb would have to decide which of the acronyms she was prepared to settle for, because the season wasn’t about romance so much as family business: make a good match, become a society hostess and beget the next generation of social elite. But of course, there have always been women too wilful, or too nonconformist, to accept their fate. And when debutantes went bad, they really went bad.

Debutantes Gone Bad
The most spectacularly bad debutante has to be Rose Dugdale. After attending Miss Ironside's School for Girls in Kensington, and a finishing school abroad, the millionaire’s daughter was presented at court in 1958, then given a debutante ball in 1959, which she described as "one of those pornographic affairs which cost about what 60 old-age pensioners receive in six months." By the 70s she’d become a revolutionary socialist, donating her share of the family fortune to the poor. But she didn’t stop there. In 1973 she and her lover were arrested for robbing her own family home, and stealing paintings and silverware worth £82,000, to raise the money for the IRA. Dugdale received a suspended sentence, as the judge thought it was unlikely she’d re-offend, but she immediately set off for Ireland to join the IRA.  In 1974 she went on a helicopter bombing raid, dropping bombs in milk churns, and appeared on “Wanted” posters across Britain and Ireland.

Dugdale then turned her hand to art theft once more, this time with a violent twist. She and three other IRA members broke into Sir Alfred Beit’s home, Russborough House in County Wicklow, pistol-whipped, bound and gagged him and his wife, and stole IR£8 million worth of old masters, including works by Gainsborough, Rubens, Vermeer and Goya. Their ransom note demanded IR£500,000 and the release of two convicted IRA bombers on hunger strike in Brixton Prison. The paintings were recovered in a car boot in County Cork and Dugdale was arrested and charged with both the helicopter bombing and the robbery. Dugdale pleaded "proudly and incorruptibly guilty", and was sentenced to nine years imprisonment. Dugdale was pregnant at the time of her trial, and gave birth to a son in Limerick prison in 1974. The father was Eddie Gallagher, an IRA member later jailed for twenty years for kidnapping. In 1978 Dugdale and Gallagher married inside Limerick Prison. It was a far cry from the match her parents hoped for when they orchestrated her coming-out season twenty years earlier.

A dangerous liaison with a freedom-fighter is not every girl’s cup of tea, but other debutantes’ rebellions against the sexual mores of their times seem quite mild today, even if they once rocked the boat dangerously. Fiona MacCarthy, biographer of Lord Byron, appalled her family by working as a journalist (becoming a 60s poster-girl for The Guardian’s female writers campaign: ‘Should women have teeth?’) then marrying ‘working class hero’ and master metal worker David Mellor and moving to Sheffield, a debutante desert. Their disapproval was ironic, considering that MacCarthy is the great-granddaughter of bricklayer-made-good “Concrete Bob”, the founder of construction company Robert McAlpine & Sons. But by the 1950s two generations was all it took to acquire social respectability. MacCarthy was among the last debutantes presented at court in 1958, and remembers that she wasn’t the only rebel: many of her contemporaries were boat-rockers too.  "A few fast girls were quite notorious. People were scared of getting pregnant then because it was a terrible scandal, but a couple of girls in my year did.” Fellow debutante Nicolette Powell married pop star Georgie Fame, and Sally Croker-Poole married the Aga Khan, while MacCarthy’s “docile” friend Teresa Hayter became an outspoken International Marxist, penning in 1971 her book Hayter of the Bourgeoisie. 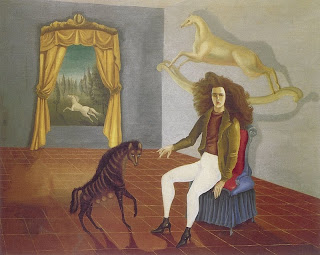 My own favourite bad debutante dates from further back. Leonora Carrington was presented at court to George V and subjected to a debutante ball at the Ritz. Exactly how much she detested the ritual is evident from her surrealist short story The Debutante, in which the heroine persuades a hyena to take her place at her coming-out ball. Despite several school expulsions, Carrington seemed on course for a respectable future until she went to London’s first surrealist exhibition in 1936 and fell in love with Max Ernst on the canvas. She met the (married) artist in person at a dinner party and promptly eloped with him. Carrington family gossip recalled that “she went to Paris to become an artist’s model” but this belittles the truth. Leonora Carrington ran away to paint, and to become a surrealist in her own right.

Carrington and Ernst hung out in Paris with Picasso ("A typical Spaniard - he thought all women were in love with him,") Dali (“He certainly wasn't extraordinary then: he looked like everyone else. It was only when he went to America that he started looking extraordinary,") and Miro (“He gave me some money one day and told me to get him some cigarettes. I gave it back and said if he wanted cigarettes, he could bloody well get them himself.“) The couple then moved to Provence, where photographer Lee Miller captured their mutual creative idyll as they painted each other in the sunshine. Until the Nazis turned up. Then Ernst was interned as an enemy alien, Carrington ran away to Spain, had a mental breakdown, and ended up in an asylum. Her family sent her old nanny to fetch her, but Carrington gave them the slip a second time, by marrying a Mexican diplomat friend to secure a visa to the States. Dissolving her marriage of convenience in New York, Carrington headed down to Mexico, where she found the perfect environment to paint. She also met new artistic inspirations: Frida Kahlo and Diego Rivera (“I liked her better than him”), and her close friend Remedios Varo. Her family remained ignorant of her international reputation as a leading surrealist painter until four years before her death in May 2011.

Leonora Carrington went to the other side of the world to escape her own debutante fate, but ironically, while the coming-out ritual is long gone in England, it’s thriving on her adoptive continent. The British debutante tradition struggled on through the swinging 60s and female emancipation, becoming less to do with match-making and more to do with charity fundraising, until it petered out in the UK in the 80s. Meanwhile, in Puerto Rico the debutante is still oppressively alive and well, as I discovered at a dinner party a few months ago, when my Puerto Rican dinner companion regaled me with stories of her absurdly lavish ball gown, and ceremonial grand entrance over an ornamental bridge, into the arms of her appointed male escorts. She may have looked like a princess on her big day, but the ritual was anathema to my lesbian friend.

Nor is the tradition extinct in Australia. Chatting to burlesque performer Tallulah Mockingbird at the book launch of The Domestic Burlesque, I heard about her debutante experience down under. “I remember feeling like a very awkward teenager rather than a beautiful young woman being released into society. But my mum did make me a beautiful frock, and I seem to recall that was the most important bit for me. Still is.” Tallulah Mockingbird continues to love dressing up, as her photo in Elsa Quarsell”s book The Domestic Burlesque reveals. Not that she could have attended her debutante ball in the risqué outfits she masterminds for her burlesque routines. Fortunately there is a ball coming up next week at which Ms Mockingbird can wear exactly what she likes.

When I set out to research real-life bad debutantes, I never thought I’d find one among my own cabaret and burlesque circle. I bet a burlesque dancer is just about the worst sort of bad girl those stuffy society mothers of the ‘good old days’ could have imagined. But to me it’s the best sort of bad girl. Exactly the sort of bad girl that Wednesday’s Bad Debutante Ball is intended for. I can’t wait to see what Tallulah wears to it.

Special thanks to novelist Josa Young, author of One Apple Tasted (http://www.oneappletasted.co.uk) for sharing two chapters of her new, currently unpublished novel charting the debutante experience over several generations.